Line blends are a useful tool for comparing two different recipes. Often, the two recipes are different glazes. For instance, you can blend two different celadon glazes in different proportions to create a new celadon recipe. Line blends are also commonly used for testing additions of coloring oxides, for instance the effect of incrementally adding iron oxide to a clear glaze.

The range of the line blend is arbitrary- you can start each variable from 0% and go up to 100% or you could choose any range in-between.

To illustrate a line blend, here is a sample using two RGB colors blending by opacity. If you already know the result of the outlying 100% blends, you could remove them from the test. However, each firing is different and it’s usually good to test the 100% blends regardless.

You could mix each test in a line blend individually, but a much less time-consuming method is to only make the left and right-most solutions. Using a syringe, you can easily create each mixed blend.

First, mix the same weight of each glaze you will be blending. Second, add some water to the glazes and sieve thoroughly. Third, add water to each glaze so that their volumes are equal. Now the two glazes are ready for blending.

Volumetric Blending in a Syringe

Below is an illustration of the blends in a 20ml syringe. If your test tiles are relatively small (7cm square) and flat, 20ml of solution should be enough for two coats of dipped glaze. 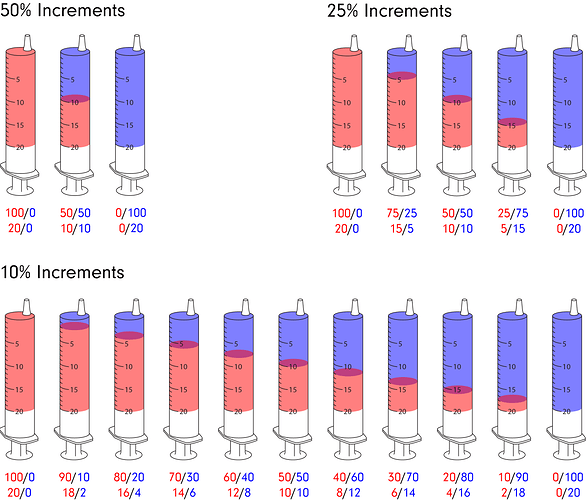 Each time before you take glaze into the syringe, be sure to re-mix the glaze and confirm it has not settled.

Second, a syringe is used to mix the two glazes in increments. By using a 30ml syringe there is extra room in the syringe for drawing in air, making it easier to mix the glazes. 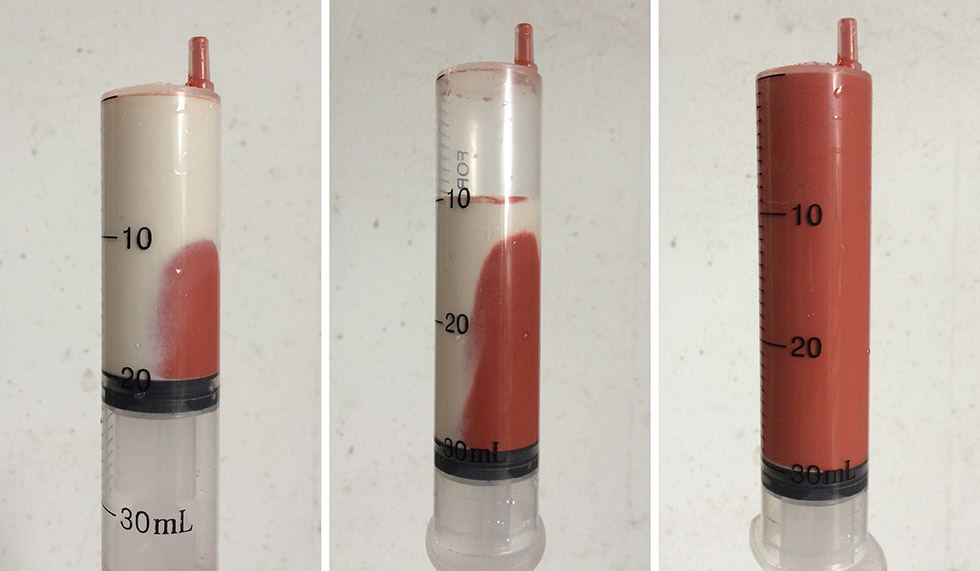 On the back of each test tile is written the glaze information. The test tile is dipped once in the glaze and then dipped again at an angle in order to cover half of the tile. The final line blend tests show a nice progression from 0% to 10% red iron oxide. 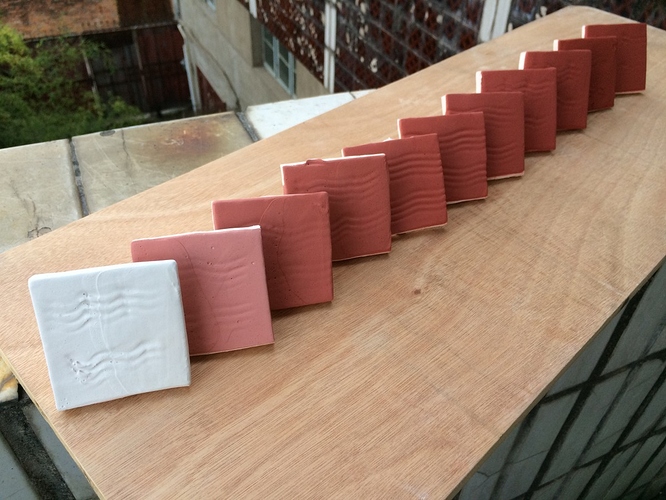 Here is the line blend after firing to Orton cone 10 in a reduction atmosphere. The tests reveal a range of interesting glazes.

The results of these tests can be viewed in Glazy:

Care should be taken when specifying the parameters of a line blend. For example, here is the result of a similar line blend created with Leach 4321 and cobalt oxide added.

As you can see, at 1% cobalt oxide the glaze is already a deep blue. Cobalt is a very strong oxide! It would have been more interesting to add cobalt in just 0.1% increments.

As you can see, at +0.1% cobalt oxide, the glaze color is already greatly affected. This test also highlights the need for sensitive, accurate scales when dealing with small batches of glaze.