Glaze recipes are best understood by looking at the amounts of the various oxides they contain, instead of their ingredients. The relative proportions of the oxides in a glaze determine - to a large degree - the behaviour of the glaze.

A useful way to understand the effect of a particular oxide is to create a series of glazes where all the other oxides remain in fixed proportion, and only the oxide of interest changes as you move along the series. For example, in the image below, Phosphorus oxide increases from left to right, while the other oxides remain the same.

To understand the effect of two particular oxides, we can fix the proportions of all oxides except those two, and create a rectangular array of glazes where one oxide changes horizontally, and the other vertically. If these glazes are applied to test tiles, the fired tiles can be arranged in a grid which shows how the glaze changes as the two oxides vary. The example below shows a glaze where red iron oxide increases from left to right, and titanium dioxide increases from bottom to top: 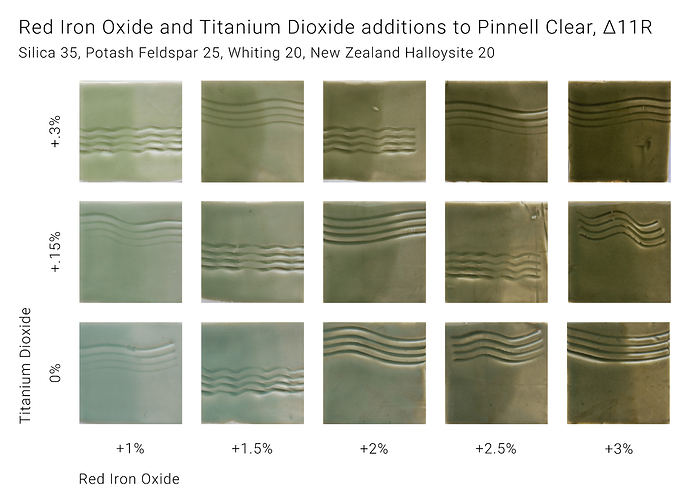 The division of glazes into these two groups is a simplification; in reality, the colour changes continuously from blueish to greenish. In the same way, the different regions in the charts shown below are simplifications of reality.

The ‘Stull chart’, drawn by R. T. Stull in 1912, is a particular example of this type of grid, where the oxides silica (SiO2) and alumina (Al2O3) vary. The diagram below depicts the properties of the glazes where silica increases from left to right, and alumina increases from bottom to top. The hatched region shows glazes that craze. 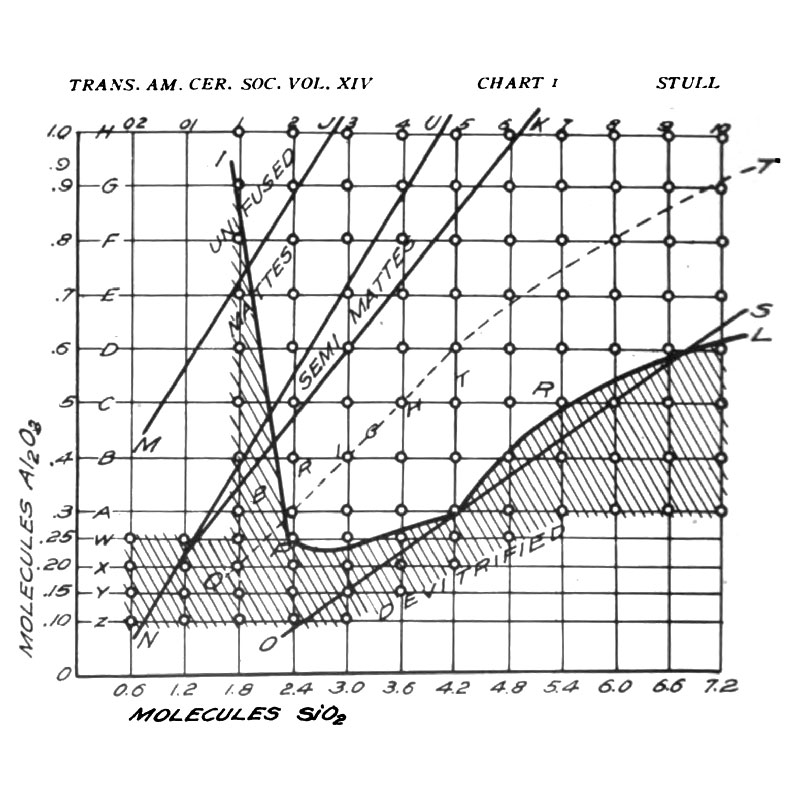 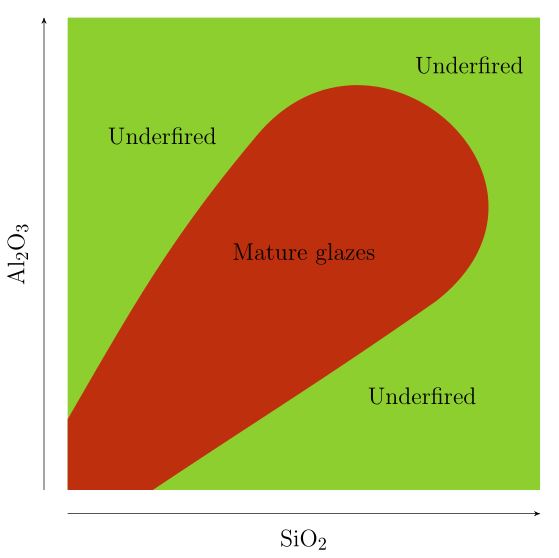 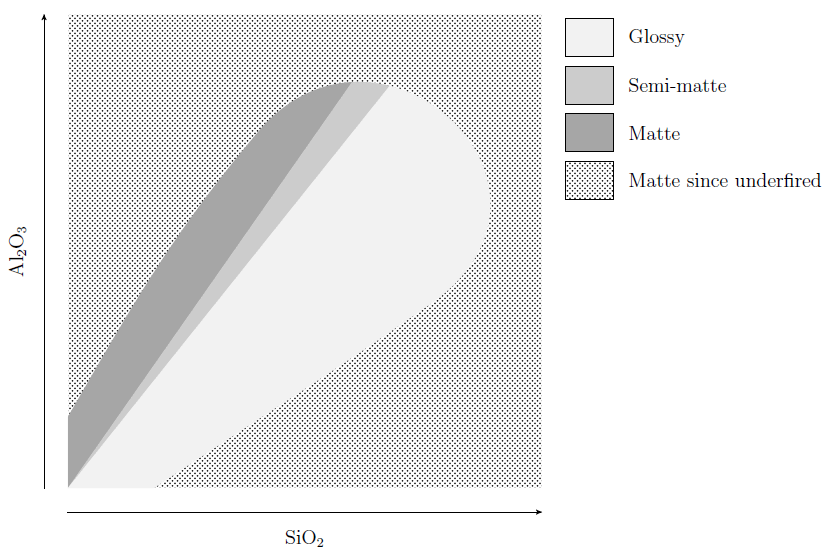 This chart was constructed by fixing the proportions of all oxides other than silica and alumina, and firing to cone 11 (the actual proportions used can be found in the original paper). If the oxides other than silica and alumina were fixed in different proportions, or the glazes were fired to a different cone, the resulting chart might look somewhat different, but the three observations above would still hold in most cases, more or less.

Although Glazy shows a version of the Stull chart as a background image when plotting SiO2 vs Al2O3, this can’t always be relied on to predict whether a glaze will be matte or glossy, mature or not, or crazed or not. Rather think of it as a metaphor that describes the big picture.

Some of the many factors that affect a glaze are the proportions of the oxides other than silica and alumina, the cone to which the glaze is fired, the cooling rate of the kiln, and the claybody on which the glaze is fired. All of these have the potential to modify the chart. However, the overview of the glaze landscape that the chart provides can still be useful. To make an analogy, imagine being lost in a dense forest, with only a compass and a map. If the map shows that the forest gradually transitions to open country towards the north-east, you’ll be able to head out of the forest, despite not knowing your exact location on the map.

For example, if you’d like to change a glossy glaze to a matte, you can modify the glaze by decreasing the silica-alumina ratio. If the glaze contains enough silica as an ingredient, the simplest way to do this is by removing some of the silica. The example below shows a glaze where progressively more silica has been removed, moving from right to left.

Knowing the general behaviour of the map can be useful in identifying potentially problematic glazes. If you have a glaze with a SiO2 : Al2O3 ratio well above 5 that fires matte, this may be a sign that it isn’t fully mature. There may be other reasons, as explained here.

The extent of the crazed region can vary a great deal, since it depends strongly on the claybody on which the glaze is applied. However, the chart shows that a general rule of thumb to decrease crazing is to increase both silica and alumina. Other options are given here.

Amazing explanations. I really like the “forest” metaphor. This goes well with my summary of the De Montmollin book I just posted. Thanks Pieter !

Thanks Jean-Pierre. I’ve added a link to your summary.